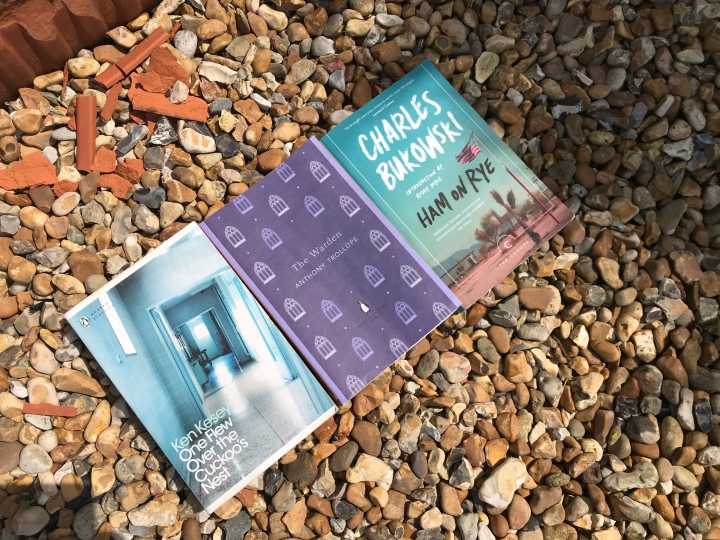 Here in Sussex, monsoon season has well and truly hit. We’ve had sunshine, we’ve had humidity, we’ve had floods and we’ve had thunder. Luckily, the three (!) excellent books I’ve buried my nose in this month have been more than enough to distract me from the weather insanity, not to mention the train delays due to raindrops on the track (or something like that…) It’s not just the weather that’s been delightfully diverse, this month, though. May’s literary selection has proved itself equally varied…

I started the month in Oregon Psychiatric Hospital…

Not literally. My first book of the month was Ken Kesey’s One Flew Over the Cuckoo’s Nest – one I’ve been meaning to read since I was 18. Kesey’s American classic brought a lot of interesting themes to mind like gender roles, race and the good old American Dream. To start with those teeny tiny subjects, gender and race, the exploration of these was particularly interesting. Why? Because Kesey’s Bedlam is perhaps the only place in America in which the white American male is at the bottom of the pecking order. Sane or no, each “inmate” is ruled over by the formidable Nurse Ratched and her squad of African American orderlies.

It seems to me, though, that Kesey didn’t want to turn the world completely upside down, so there is still a distinct lack of respect for those characters that are seemingly in a position of power. Just look at the chaos our protagonist, Mr McMurphy causes. It’s not insignificant that he’s an Irish-American man. It’s also not insignificant that all of this disdain and disrespect is communicated by Chief, a Native American representative of a minority group equally scorned by the white majority in the 1950s.

Let’s not forget that old American Dream chestnut though – sarcastically referred to by Chief and the patients as “The Combine”. The Combine represents all of America and the desperate desire to fit everyone into the mould of “model citizen”. These men, most of whom are committed to the hospital voluntarily, literally believe they’re insane because that don’t quite meet that status quo. It’s pretty clear that Kesey takes a pretty dim view of American freedom.

To stop babbling and sum this up, I would for sure recommend this book to anyone looking for a book that will make you laugh out loud one minute and shock you into silence the next.

My next novel was essentially a complete U-turn. Having received The Warden, Anthony Trollope, for Christmas (thanks Mum), I finally got around to opening it up. Not unlike a novel by his contemporary Charles Dickens, Trollope’s The Warden is basically one big joke on society – so it’s not actually so unlike One Flew Over the Cuckoo’s Nest after all.

It might be the caricaturing that seems to come as second nature to these Victorian authors, or it might just be the sheer weirdness of the era, but something about these kinds of social critique novels never fails to crack me up. Considering The Warden is just shy of 200 years old, this is kind of impressive.

My love of literature from this period sparked my curiosity after finishing the book and I wanted to find out just how much of an influence Trollope and Dickens had on one another. You can imagine my surprise when Wikipedia told me they were pretty much novelist nemeses. In fact, Trollope’s fictional author “Mr. Popular Opinion” is a pretty big dig at Charles, accusing him of merely playing to the current sentiment of the present situation, whenever or whatever that might be.

Rivalries and comparison aside, though, The Warden is a pretty easy read for anyone who’s used to the Victorian style of writing. It’s one of those books with a straightforward chronological timeline in which nothing really happens, but everything happens. And, if that doesn’t sound interesting, it’s also pretty funny.

And I finished in Great Depression-era LA…

Taking somewhat of a literary roadtrip (and journey through time), I made my way back to America, this time in 1930s California. My last novel of the month was Charles Bukowski’s Ham on Rye – a book that has become one of my favourites by a long way.

I think the thing I liked most about Ham on Rye is just how relatable it is. Told through the eyes of Hank Chinaski (a thinly-veiled alter-ego of Bukowski himself), Ham on Rye follows Hank’s childhood, adolescence and young-adult life as he comes of age and pretty much tears society apart (I think there’s a theme this month).

What I do get, though, is the frustration that Hank feels when he cannot fit himself into the different moulds and roles he is presented with by his parents, his teachers, his friends and his classmates. Whilst it might not be quite as extreme in the case of most teenagers, I think everyone has a moment growing up when they feel that they’re “real self” is just not quite “right”. What’s more, I think we all feel that anger and disgust at some point to the status quo and all the people who we think are better at fitting in than we are. We just don’t act on it in quite the same destructive, masochistic way.

Let me just say, this is definitely not a book for the easily offended. If that’s you, stick with The Warden. Otherwise, this should be on everyone’s book bucket-list. It’s hilarious in the very best and the very worst ways.