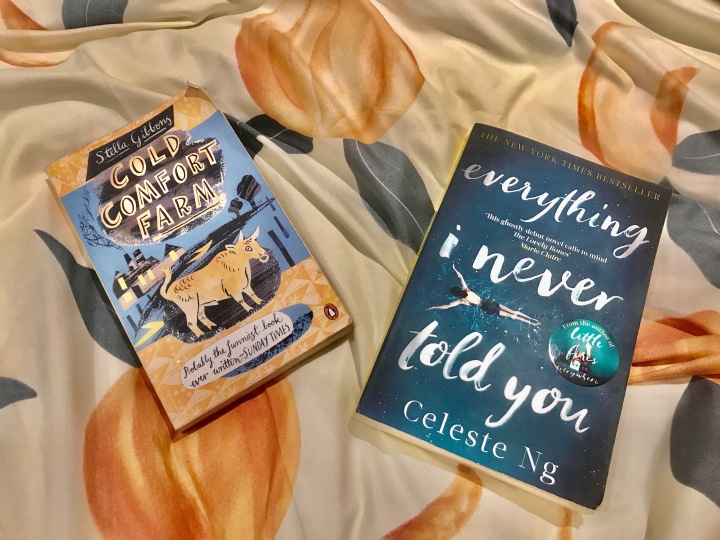 It’s time; a little book update has been long overdue, and the two books I’ve read recently deserve a little time in the limelight (small though it may be). My lovely new commute (by lovely, I mean it’s an hour shorter than it used to be) has reinvigorated both my motivation and energy for reading and so far, I’m thoroughly enjoying it.

Let me just say from the get go, this book is hilarious. It contains possibly my most favourite quote from literature ever, which is this: “I think we ought to dine out – don’t you? – to celebrate the inauguration of my career as a parasite”.

This line pretty much sums up the not-so-subtle critique of everything that Cold Comfort Farm is ultimately trying to achieve. I can literally picture the author sitting at her desk with her tongue firmly planted in her cheek for the entire time it took to write the novel.

Stella Gibbons, kind of like Muriel Spark, has an amazing way of taking every convention – social, literary or otherwise – and using them against themselves.

For a start, she’s kind of mastered the art of writing the perfect pastoral novel, if only to call it out on it’s own BS. She even takes the liberty of adding asterisks to the most poetic. most bullshitty paragraphs, just to make sure you’ve noticed.

And, when you read that alongside her, almost sci-fi, vision for the near future (bearing in mind, this is set some time in the 1930s), it’s definitely enough to make you question the place of the pastoral in the modern world.

But that’s not the only thing Gibbons is questioning in her contemporary world. The “parasitical” (to use her own words) Flora is both heroine and anti-heroine. She is heroine in that she is the main character of the novel, and questionable though her motives may be, she does seem to have the other characters’ best interests at heart. On the other hand, her anti-heroine side lies in the fact that we feel no emotional attachment to her; to me at least, she comes across as kind of a brat, with nothing better to do with her time than meddle. She is, in a few words, the epitome of the well-to-do socialite with – ironically – nothing to do. To a 21st century modern, career-driven young women, this is frustrating, to say the least and I think it’s meant to be.

Everything I Never Told You – Celeste Ng

This is one of those books that I would never have picked up, had it not been for the recommendation of a friend (shout out to Lorna ♥). But the book snob in me was pleasantly surprised to find that this was actually really thought-provoking as well as having a gripping storyline.

It’s about a Chinese-American family, set primarily in the 1970s. After the death of Lydia, the middle (and favourite) child, the Lee family are forced to revisit the pasts that they haven’t dared to think about for years.

The root of the novel I think is poignant, in that it’s relatable and recognisable in pretty much all families, friendships and relationships, at least to some extent. It’s the things you hold on to, the feelings that you don’t express, the words that are always thought and never said. And, whilst this may never manifest itself in anything as tragic as the death of a loved one, it can definitely touch the ways we communicate with and view the world around us.

Not just that though – the things that are left unsaid in the novel are the things that its characters haven’t found out about themselves yet. I think there’s a reason there’s only a few characters in the novel separate to the family and it’s this; because the Lees operate as a unit, in an “us against the world” type scenario, their individual dreams and motivations get confused and lost amongst those that they think are the dreams and goals of the family unit. The problem is, these dreams, whether for themselves or for the family are never communicated effectively and that’s why, when things don’t go as planned, the proverbial hits the fan.

At the crux of this is Lydia’s blank diaries. These say so much about the relationship between the mother (Marilyn) and daughter. That nothing was ever shared. Marilyn gifts Lydia a new journal every Christmas for her to write her secrets and thoughts in. Years later, when looking for clues around Lydia’s death, she opens the diaries to discover they are all empty. Lydia, who felt like she couldn’t share her true hopes and dreams with her parents, especially her mother, cannot bring herself to communicate these feelings into anything that has anything to do with mother or father, instead, turning to her brother, and later to neighbour/ heartthrob/ brother’s future husband (?).

I think in today’s world, where we’re all so glued to screens and so driven by personal motivations, this book is an important reminder that telling your loved ones you love them every day is the only thing that matters.