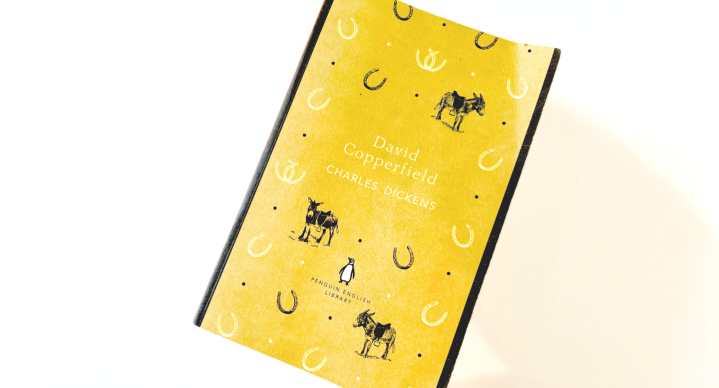 As if 2020 has gone by in a state of lockdown and we are already in July. How has this happened? Since I’m still working four day weeks and I’ve had to take all of my annual leave on top of that, I have had a lot of time on my hands to do not that much. At the time of writing this, my mother has just text me to tell me I need to get out more. That’s where I’m at. Luckily, I am broadening my cultural horizons, if not my geographical ones, and this month I thought I’d revisit some Dickens.

As an literature nerd, I am a firm believer in reading the book before watching the movie, so David Copperfield has been sat on my shelf since the film came out back in January. And since it was this month’s read, I’m finally allowed to watch Dev Patel and Tilda Swinton in all their glory.

On to the book; I have been a Dickens fan for a while, as Great Expectations was one of the first “proper” books I read that wasn’t for school. He’s a very accessible author for getting into the classics and his amazing characters bring the stories to life in a way that I don’t think many other authors can do.

The emotion and sheer detail in some scenes really reflect the autobiographical elements of David Copperfield, such as David/ Dickens’ time at work as children, their early loves and their successes as journalists and authors. But there’s also so much intrigue, caricature and coincidence that the fictional aspects remain alive and well.

There were parts of this novel that truly made me laugh out loud; something that is rare for me. Most of these moments came from David’s aunt, Betsey Trotwood, the sassiest sass queen that ever graced a work of fiction. First of all, her vendetta against the donkeys on her front lawn (just read it, if you don’t know what I’m talking about). This is not only comical in a slapstick kind of way, but is also very clearly a thinly veiled reference to her renunciation of men, who she quite clearly thinks are useless. This is not surprising given that we later meet her estranged husband, the cause of her financial downfall and a man who clearly holds a great deal of emotional power over her. During this episode, we see a much more vulnerable side of the otherwise formidable aunt figure who has no time for anyone’s nonsense. I love her.

Short of going through all the characters (because there are a lot), David himself is kind of annoying. He’s pretty whiny and also very “holier than thou”. Wifey number one, Dora, is equally as irritating.

The structure of the novel is smart. On first glance, it’s a journey through David’s life and all the episodes that bring him to the present moment. But looking closer there are a lot of stories within the novel; that of Emily’s downfall, Uriah Heep’s fraud, Mr Micawber’s “fortunes”, Traddles’ engagement, the list goes on. I think reading it as a full novel, rather than in the installments it was originally published as, changes the story a lot. In installment form, David Copperfield could almost be a series of short stories, with David as a central theme.

As a “bildungsroman” or coming of age novel, David’s character arc is interesting (even though he’s a pain). Each episode and substory features a different aspect or stage of David’s identity, and interestingly, he is very rarely referred to as David. He is Mister/ Master Copperfield, Mas’r Copperfield, Master Murdstone, Brooks of Sheffield, Mr Copperfull, Davy, Doady, Trotwood/ Trot, Copperfield, Daisy, but he’s not David. The fact that David Copperfield is the novel’s ultimate title reflects the fact that in the act of writing his history, he has found and claimed his identity, independent of the various names and guises he is known as throughout the novel/ his life.

This is Dickens, so there’s way more to unpack than can ever be fitted into one blog; I’ll leave the essays to the pros. I would recommend this though, especially for people who want to get a bit more familiar with the classics. I will always love Dickens’ characters and the emotiveness of his work, so I’m sure he’ll appear on the blog again soon.