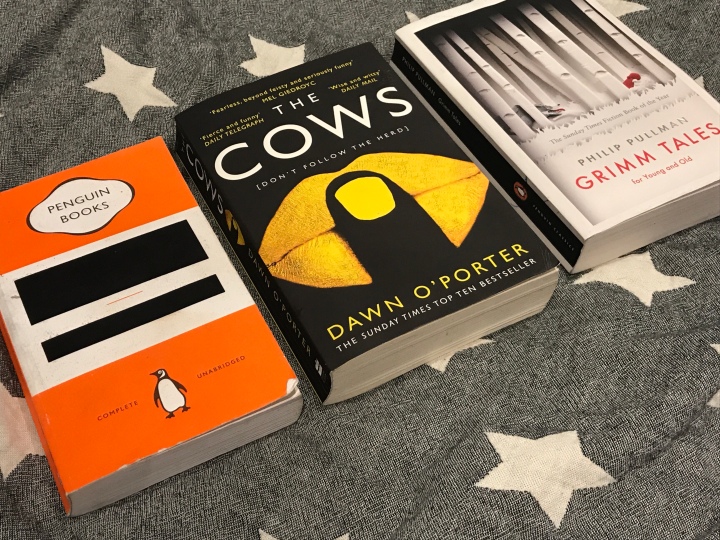 Before I start, if someone could please tell me how it’s already July, I’d be very grateful. Terrifying speediness aside, I’m glad that summer’s rolled around and brought the sunshine with it… I’m sure most Brits will agree with me when I say it might even be too hot (because, when it comes to weather, we’re never really satisfied). I’m sure most Brits will also agree with me when I say that making small talk about the weather in written form is possibly the most British way to start a blog post about books, but that’s beside the point… I’ve got three books to talk about for June (it’s actually four, but one of them was really boring and I don’t have much to say), so I should probably just crack on…

I love, love, loved this. Dark and twisted as it may be, there is so much truth in the modern-day dystopia George Orwell depicts in 1984. Before I continue, there are just two caveats I’d like to make for any pedants out there: 1) I know, I wasn’t around in the real 1984 and 2) I realise that the world is not divided into three superstates ruled over by “The Party” (Orwell’s thinly-veiled depiction of the “Communist overlords” as he seems to see them). Caveats aside, as a marketing professional, I know just how much Google/ Facebook/ The Internet know about us. And that feels suspiciously like Big Brother to me. Couple that with rumours of companies watching you through your webcam (which I highly doubt) and you’ve essentially got yourself a 1984-esque all-seeing telescreen complete with the power to pretty much control your life. So, it might be 40 years too late, but Orwell might just have been on to something…

In a dramatic shift in tone, my next book was the first “fun” book I’ve read in a very long time. As you might expect if you know who Dawn O’Porter is, this book is hilarious and comes with a fair share of condemnation of the status quo to boot. I won’t give too much away, because I think it’s kind of a must-read, but let’s just say it’s a pretty ludicrous story that is actually scarily un-ludicrous. To sum it up, it’s all about a woman who goes on a date, decides not to go home with the guy and then ends up getting filmed masturbating on the tube and the video ends up going viral… Because of course, what else would you write about? At the heart of the novel (albeit via the means of this rather unlikely turn of events) is a relatable and humorous take on feminist issues in what is still a male-dominated world. Exploring everything from female sexuality to breast cancer, women’s place in the workplace to the pressure we as women put on each other, it’s an incredibly thought-provoking read that doesn’t feel serious at all.

I loved the fairytales when I was little and so I was intrigued to see what a modern-day fantasy writer could do to them. Philip Pullman, of His Dark Materials fame, tells these classic stories to perfection with his own little twists here and there. Complete with commentary that’s a great read in itself, this was definitely a stellar find. The book contains 50 classic tales, told by and to the Grimms. These include everything from the old classics like Cinderella and Snow White but also some really, really random stories of varying fame, complexity and readability. As classic folk tales, all Pullman has really done is pull all the pieces of various verbal storytelling cultures together and put them into modern, colloquial language (although there is the occasional embellishment here and there). For anyone interested in fantasy, fairytales and fast reading, I would definitely recommend this.

One thought on “What I’ve been reading: June”